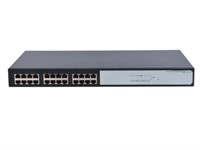 Model Choices to Meet Most Design Needs for Basic Layer 2 Networking
– The HPE 1420 Switch Series has four models to choose from, all with Gigabit performance but offering different uplink options. Consider the 16-port model for locations needing fewer connections and one of the 24-port models where more connectivity is required.
– The 1420-24G-2SFP model with SFP uplinks is ideal where Gigabit fiber is required, while the 1420-24G-2SFP+ 10G Uplink model with SFP+ uplinks is available where 10GbE is needed now or in the future.
– Anticipate the installation of IP voice, wireless Access points, or video surveillance cameras by deploying Power over Ethernet (PoE). Choose the PoE+ model for highly cost-effective PoE deployments.
– All 1420 Switch Series models are fanless for silent operation, usable in office settings around workers. Units have internal power supplies with power-cord plug-in simplicity.
– Units can be deployed for desktop operation or can be rack mounted.

Cost-effective Ownership for Now and into the Future
– The HPE 1420 Switch Series offers a cost-effective upgrade path to next-generation 10GbE networks to reduce performance bottlenecks when connecting to storage and servers.
– The switch series includes PoE+ options to power IP devices without the cost of additional cabling for power.
– Green features include energy-efficient Ethernet IEEE 802.3az, auto-power down mode on idle ports, and power savings on short distance cables for low power consumption.
– Limited Lifetime Warranty.